When Cakes Square Off...

I'd like to introduce this cartoon with some intelligent, witty commentary about how I thought it up, but I can't.  I was eating cake, that's all. 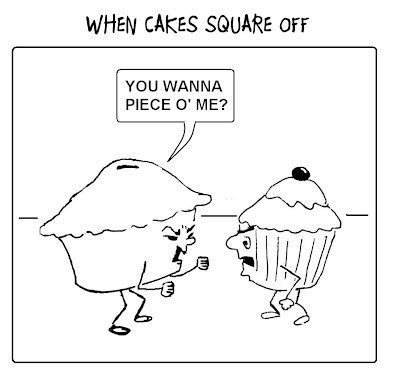 If you've not been following this story, you can catch up using the Story So Far link, top right sidebar.

The van rumbled to a halt at the security barrier outside Infinity Recycling. A uniformed guard emerged from the gatehouse and approached. Box nudged the barrel against the van driver's ribs and hissed at him not to try any funny business. The driver wound down the van's window as the guard approached, and held up his id.

The guard examined it briefly, checked the photo against the driver’s face, nodded and went back into the gatehouse. A few moments later, the barrier swung up and the white van rolled into the compound.

'Take us to where you'd go if your mission had been successful,' ordered Box.

The driver nodded and swung the wheel around, piloting the vehicle around to the back of the building. He drew to a halt facing what looked to be a blank wall. Box looked at him quizzically. the man shrugged and pressed a button on the van's key fob.

Ahead of them, two sections of the wall slid apart, revealing a well-lit tunnel within.

'Wow, that was certainly well disguised,' murmured India from the back of the van. The vehicle jolted into motion once more and they headed into the tunnel which curved away to the right and sharply downwards.

Prada was pacing the room once more.

“It’ll be light soon,” she said to no-one in particular.

No-one bothered to answer her. Mercury was slumped in his chair, eyes closed, while Othello stared out of the window. A few triangular sandwich packets littered the long conference table, along with a few cans of drink.

Since a silent guard had dropped off the food and drink, they had been left to themselves. Prada sighed and moved to stand next to Othello at the window. There wasn’t much to see; the window looked out into an internal courtyard which boasted a patch of grass, some planting and a few seats – presumably for the Infinity staff members to take breaks.

“I can’t help feeling we should be doing more,” she continued.

“Like what?” asked Othello. “We can’t get out, we can’t contact anyone. Best we wait it out for now and see what happens.”

Prada sighed and turned to face into the room once more. Out or boredom, she let her eyes wander where they would, although she didn’t expect to see anything she hadn’t seen before: long, polished conference table; squeaky leather conference chairs, cupboards with nothing in them. Her eyes wandered to the ceiling. It was the usual suspended affair made up of tiles interspersed with long fluorescent light fittings.

“Could we get out through there?” she wondered aloud.

Othello turned to see what she was looking at.

“Doubt it,” he said, “The space above isn’t that big and I don’t think the structure would bear any of our weight.”

“Pity,” Prada sighed. Then she drew in a quick breath, before speaking in a low voice. “What about that?”

She pointed at the centre of the ceiling where a small round smoke detector protruded from the middle of a tile.

“Interesting,” agreed Othello, also in a low voice “but unless you’ve got some boy scouts to rub together…”

She grabbed her jacket from where it hung on the back of one of the chairs and began ferreting in one of the pockets.

“A-ha!” she whispered, triumphantly, holding up a small, flat square of folded cardboard.

“Who knew a hole in one’s pocket could actually be useful?”

Othello stepped over to get a better view as Prada opened out the cardboard.

“Thank you, Crazy Jake’s Bar and Grill,” she breathed.

Inside the cardboard there were two matches

They left their erstwhile chauffeur gagged and bound in the rear of the van. There was a solid-looking door set in one wall of the basement car park and Mr Teeth and Box headed over to it. A few steps behind them, Harold and India followed.

A quick swipe of the Infinity goon’s id card resulted in a most satisfying clunk as the door’s locking mechanism disengaged. Box pushed the door open to reveal an empty, brightly-lit hallway leading away into the building’s interior.

He went through the door, followed by the others. Behind them, the door swung closed on its spring, locking with a click. Box glanced at his watch.

The little party made its way along the hallway, Mr Teeth and Box leading, followed by an invisible India and Harold. They soon reached an intersection of corridors. There was nothing much to indicate the best way for them to go to find Mercury and the others. The goon hadn’t known – or had pretended not to know – where they would have been taken.

“There are some stairs through those doors up ahead,” said Box, indicating a set of double doors, above which someone had helpfully placed an emergency sign.

They began trotting down the corridor towards the stairwell.

Just as Box reached out his hand to push open the double doors, the air was split by the wail of a klaxon.

Harold: the story so far

Click here to get fully and quickly caught up with Harold's story.

Argent
Smart, witty, generous, attractive.....are all things I wish people would say about me.