I love reading.  Now, before you get the wrong idea, this is NOT going to be a post eulogising the joys of relaxing with a good book; we all know that’s a very satisfying and calming thing to do, so ‘nuff said.

No, as I said, I love reading, but of late it’s becoming more and more difficult.  I used to be able to spend several languid hours at a stretch with my nose between the covers and my mind off somewhere completely else. Now (I suppose it’s a function of aging) my eyes just can’t sustain that level of concentration – not to mention the monkey in my head that won’t sit still for anything, curse him!

So, reluctantly, I have turned to audio books.  I say ‘reluctantly’ because in the back of my mind, on a high shelf next to the Bumper Box of Regrets, there’s a nasty little idea that having a book read to you is cheating somehow; little kids have stories read to them, not adults – at least not adults that can see.

This is nonsense of course; that venerable institution, BBC Radio Four, has ‘Book of the Week’ and ‘Book at Bedtime’ which is exactly that – someone reading a story.  Radio Four is definitely not a station for children.

Anyway, I’ve started listening to audio books and have discovered a few ways that they are actually better (dare I say it) that reading a print book.

You can enjoy the story while you are doing other things like cooking, exercising, doing a crossword or constructing a scale model of St Paul’s Cathedral out of matchsticks.

Sometimes, the makers will add a little music here and there which can, if done properly, really enhance the atmosphere of the story.  With a print book, you’d have to add this for yourself in your head and who thinks to do that?

The reader, if they’ve been well chosen, can bring the story to life with just a few differences in emphasis or vocal tone and pitch.  Actually, here’s a question: when you are reading to yourself, do you ‘hear’ your voice in your head reading the story or do the words just somehow flow into your head and create meaning?  I personally ‘read’ to myself.  My husband does not and, as a result, sometimes does not see puns and other word-play jokes in the text.  What do you do?

More than one person can enjoy the story at the same time.  My hubs and I are currently working our way through a series of audio books – The Dresden Files by Jim Butcher – and it is so gratifying to turn off the TV and just sit quietly together listening and responding to the stories.  This is a bit harder with a print book!

Any of the Jeeves & Wooster stories by P G Wodehouse as read by Jonathan Cecil.  These are just hilarious!

The Harry Potter books as read by the ubiquitous Stephen Fry.  Mr Fry’s rich, plummy voice is just right for these and there’s loads more detail in the books than the films.  I’m fairly sure I don’t have to explain the whole Harry Potter thing by now.

The aforementioned Dresden Files books as read by James Marsters (Spike from 'Buffy the Vampire Slayer').  These are also about a wizard called Harry, but one who happens to be the only Wizard Private Investigator listed in Chicago’s phone book.   The world that the author describes in these stories is our own, complete with mobile phones, cars, guns, etc.  The stories are fast-paced and tightly plotted. Harry Dresden and the other main characters are sympathetic and believable.  Well worth a go in print or in audio form.  Mr Marsters’s vocal talents are just perfect for this gritty series.

So yeah, I love reading, but now I’m learning to love listening too.
Posted by Argent at 10:16 12 comments:

Yes, Top Gear's on the telly, so naturally I'm writing a blog.  Am I mad?  Top Gear's on!  The best car-related entertainment show EVER!

Anyway, to business.  Go to Raven's Nest for the rules and suchlike.  Join in already!

This mini may be from a coupla weeks ago, can't remember and am too idle to check.

The melody repeats itself in my head over and over and over like a broken record. It was playing on the car radio as I drove into work and has attached itself to my every thought like some kind of musical limpet. The annoying part is that it was not the complete song that is lodged in there, just a chunk of the chorus – something about joy in space. Appropriate, I suppose. The night air is crisply chill, as I wind the crank. Above me, a segment of the domed roof slides creaking back, revealing my night’s work.
The stars.
Joy in space.
Oh, yeah.

And this week's dollop of Harold (catchup link top right)

“Well, I hate to say it, old button,” said Teatime, “But I did tell you so. These OGS types are putting up with you only for as long as takes to resolve the current situation. I must say I’m glad you’ve finally seen it for yourself. Mind you,” He paused for a wicked moment, “I’m surprised that Agent India waited this long before using her taser on you again.”

“Oh, ha, ha,” replied Harold sarcastically, “I might have known better than to expect sympathy from you, but I really thought we were finally getting somewhere here. She even agreed with my idea of getting Mr Box out of the hospital. I’m such an idiot.”

“For the record,” said the little monkey, “She was acting for the good of the mission, if what you have told me is true. I’m sure she took no pleasure whatsoever in it.” He could barely keep his little mouth from stretching into a grin as he said this, however.

Harold knew the little fellow was right of course – he usually was, the smartypants. That didn’t make it any easier to accept, though. He sighed to himself. Why, oh, why did he always have to crave everyone’s friendship and approval? You’d have thought that after all these years he’d have grown out of that particular weakness, especially since that was precisely the character defect that had got him banished to the Basement along with the rest of the rebels all those long desolate years ago – as his father never tired of pointing out.

“What are you two talking about?” asked India. Harold and Teatime had been talking in low tones in Infernal for privacy.

India raised an eyebrow: clearly the demon was still ticked off. She didn't care.  It wasn't like she needed its forgiveness anyway.

Harold, Teatime, Mr Teeth and India were travelling in the back of the Infinity Recycling van. Driving the van was a very morose member of unit four, whose cooperation was being encouraged, so to speak, by the gun that Box was pointing at him from the passenger seat. As an additional assurance of his good behaviour, the other members of the team were being held – after some rough but effective first aid - at Mr Teeth’s house by some of Pauli’s men. The rest of Pauli’s people were following on in their own vehicle.
Box was wearing a silver suit cobbled together from the least visibly damaged bits of the suits that the intruders had been wearing. That the ski mask-like headgear that went with the suits obscured his features was an added bonus.

Mr Teeth had not been happy to have one of the Infinity Recycling people drive the van but, as Box pointed out, they would need someone with valid credentials to get past the security guard at the gate. What happened after that… well, any battle plan was only any good until the first encounter and everyone had their part to play and all they needed was to get inside the compound.

“Ok, we’re getting close now,” said Box from the front, “Demon, you’ll need to switch on your suit.”

Harold did so. He had no idea whether the invisibility suit would prevent Infinity’s detectors from registering his presence – they only had India’s experience (and Box’s when they had tested it again to be sure) to go on.

Once again, the world seemed to switch to bizarre hues and all sounds became slightly muffled.

India, sitting opposite, relaxed slightly, the constant irritation of Harold’s presence having ceased the moment he had activated the suit. She took this as a cue and activated her own suit.

This had been the weirdest mission; working with demons instead of banishing them, fancy invisibility suits… They never covered any of this in training. Maybe she should request an extra module to be added in future… As things stood, she could not wait to get this strange mission over and done with, could not wait to get back to the everyday business of spotting the Fallen and despatching them back to their accursed home where they belonged. Well, the way things were turning out, one way or another, she would not have much longer to wait for that happy day.

The van bumped and swayed a little as it made a right turn onto the business park that housed the buildings belonging to Infinity Recycling.

“Get ready, people,” said Box, his voice tight with excitement. “We’re almost there.”
Posted by Argent at 21:53 6 comments:

A most lame jest, but in truth, I could not resist... 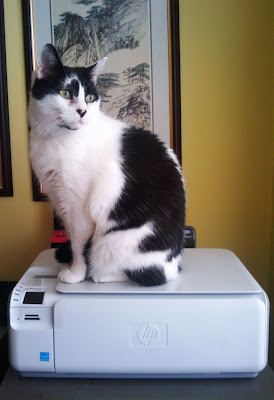 Happy middle-of-the-week, everyone.
Posted by Argent at 10:27 6 comments:

Harold: the story so far

Click here to get fully and quickly caught up with Harold's story.

Argent
Smart, witty, generous, attractive.....are all things I wish people would say about me.